Jim brought my dream to life. 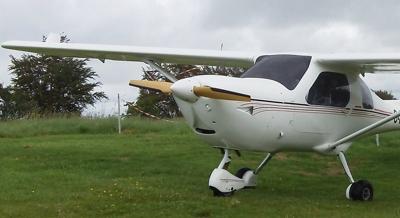 I went flying for my first time on Thursday 12th April and I extremely enjoyed it. I flew in a Jabiru, and had a great time, pulling manoeuvres such as 90° turns and nose dives.

Thankfully, the weather stayed good for most of the hour. I flew with my dad’s old friend, Jim Lister, who is a microlight instructor at Strathaven Airfield. We were flying in Jim’s Jabiru UL-D Calypso microlight.

The Calypso is 5.53 metres long and 2.013 metres high and has fibreglass construction. The Jabiru is a powerful microlight, which holds the world speed record for 3 axis microlights, and our cruising airspeed was 90-100 knots (approx. 103-109mph).

When we went into a nose dive we accelerated to 120 knots, the aircraft’s maximum speed, in a matter of seconds.

The sensation of taking off is phenomenal, but once you go into a dive you leave your stomach behind. The G’s of turns pressing against your body feel fantastic as well, but the best feeling of flying is feeling the sheer power of being in control of an aircraft, especially if there are no other aircraft nearby.

G’s are a unit of force caused by acceleration other than gravity (e.g. jet-engine). If an object is allowed to free-fall under the influence of gravity, it will not feel g-force.

Once we were airborne, Jim let me fly the Jabiru. It takes a while to get used to flying, as the faster you go the more sensitive the controls are, and I was nervous at first, but after a while, thanks to Jim talking me through it and being funny, I was soon performing turns.

We flew around, and I experienced that flying in clouds is very dangerous, as you can’t see where you are going, and there is turbulence inside the cloud.

We went to a few different places, including Hamilton, M&D’s and Strathclyde Park. From the height we were flying at, (2000 feet approx.) we saw that most things on the ground looked completely different; there is a complete change of perspective.

Join in and write your own page! It's easy to do. How? Simply click here to return to Share your story..