Facebook is clearly the way forward for any business and while flyinginscotland.com is purely online with no premises or products, we are no exception.  Our aim is to provide a way for the many and diverse strands of aviation in Scotland to get together, share information and support one another.  This site will always be about information but the way people use the internet is evolving so if any business wants to survive, let alone thrive it must evolve too.  It has become apparent that people are now searching for companieson facebook before even google.

This trend is on the rise particularly among younger users as I have only just found out that you can do that on facebook.  While these users may be to young to be pilots, they are certainly old enough to be interested and enthused.  These very people are the future of your club.

I have been trying to persuade instructors and those influential people in flying clubs I have visited to join Facebook and like our page.  As with setting up a website too many don't yet see the benefits in relation to the time they would have to spend doing it.

The reality is that with Facebook in particular, a complete beginner can set up a profile in about half an hour, probably much quicker.  Many club members and pilotswill already have facebook pages so they can see what is going on, from weather updates to aircraft serviceability.

The real win for the club though is that you will immediately gain access to potential new members who have never thought of joining.

As I have said before there is an image of private flying that it is too expensive, too difficult and too dangerous.  That is not necessarily the case as the safety record is very good indeed, almost anyone can do it and you can fly cheaply or even for free if you know how to go about it.

There is the trick, the clubs need to TELL people!  Tell them about your club, upcoming events, people and how to get involved.

I think you would have to be blind not to see how many people use smart phones, laptops and work computers during idle moments to catch up on what their friends are doing.  A few seconds of tapping away and you can update everyone in your network with what you have been up to, with high quality photos to prove it.  That morning train journey can be an education and an inspiration with facebook on your phone or i-pad.

Friends make comments and share pictures so that their friends get exposed to things they would not normally see or hear about.  I have seen how friends comment on a picture and it gets clicked by people I have never heard of.

I shared a picture on the pilot Scotland facebook page earlier today, which was taken from the cockpit of an Alph Jet in close formation with others.  Now that is a perspective that most of us will never see for ourselves but we can all dream and catch a glimpse. 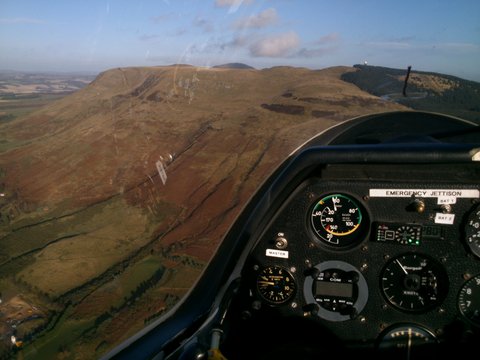 This is an image I took on my phone during my first flight in a glider for over 20 years.  If I wanted to I could have posted that on my Facebook page before we reached the hill.  I'm not saying that to boast, but to make the point that it is neither difficult nor time intensive to create an eye catching post.

I totally understand that many clubs are run by the members on a volunteer basis and that even if they have full time staff they are generally pretty busy.  Too busy to give a quick update?  I would suggest not.

I may actually offer to set a facebook page up for the next club or pilot I visit that does  not have one.  That would be a nice bonus for a cup of tea.

I hope that if you are reading this you will pop over to our facebook page and click like to get the latest info on flying in Scotland.

Forward thinking clubs are trying to hook young people while their parents are still paying the bill.  They recognise that if they do not go on to become a professional pilot they may well drop out of the flying scene perhaps for decades before they have the money and free time available to return.  If we hook them now they will come back later.

Now that is an admirable approach, but what if you could offer these kids a free trip or one on a cost sharing basis?  I know that many pilots like a bit of company when they are up for a trip.  Share that information via facebook or one of the other social media pathways and you will have the seat filled in no time.

Air cadets, enthusiasts, journalists, students, photographers, the list goes on, all have facebook accounts and a large network of friends that you could never hope to reach.  If you can reach them and excite them even a little, they will talk about you and share what they see.

The aviation industry takes a hammering in the press on a daily basis, use your influence to change all that.  Word of mouth has always been the best form of publicity, welcome to the 21st century version of chatting over the garden fence.